After the freezing, not-so-great experience in Motala, Sweden earlier this Summer, I was ready for the next challenge in Wiesbaden, Germany. I wanted to prove to myself that the form and fitness I experienced in my toughest training sessions would make a stand on race day.

After Motala I hated triathlon. For a day. Then after a self-afflicted slap in the face I gained motivation and summoned myself to plan out the coming weeks of training. But Motala was not done with me! Two days after the race I caught a vicious sinus infection from racing in freezing conditions for over seven hours. It would stay with me for a few weeks.

But I started training at my best ability and soon enough I did some high-intensity brick sessions of one to two-and-a-half hour rides followed by half-an-hour to one hour runs at speeds I had never clocked before during training. That slap in the face did good. I was ready!

I look up through the visor of my aero helmet to see an extremely steep, wide, never-ending road. Scattered up front, as far as the eye can see, are triathletes on their bikes looking like they have all come to a complete halt. My cadence is down, probably somewhere between 50-60 rpm. I try to switch gears but nothing happens when I squeeze my right shifter. I’m already riding the biggest cog and smallest chainring so I have to keep pushing the pedals with full, slow thrust or stop for a bratwurst and a beer. I continue pushing, sucking the life out of my legs. The beer will have to wait.

But we’re not there yet. Let’s back up when I still like triathlon.

It’s race morning. I’m stuffing my face with cereals, milk, a banana and other carb-rich junk. The same routine as always. It’s off to T1 — the check-in, the bike preparation, the mandatory porta-potti visit, the wet suit struggle — and all of a sudden the horn blows and it’s time to start swimming.

All the hours, all the thousands of meters in the pool, all the Tuesday and Thursday 5 am-mornings, all the drills and all the deep goggle marks on my face are somehow forgotten when I scull in the water waiting for the start. Racing really is here and now!

The swim takes place in the Lake Raunheimer Waldsee with a short so called Australian exit (run up on land and back into the water), where you also get a split time. I have a decent swim, except that my swim cap keeps coming off my head, creating some drag. I guess the Germans are big-headed people or they just ordered XXL for everyone because it was cheaper that way. Let’s blame the Germans for everything.

The opening few hundred meters do show that the over-sized swim cap may have had an effect since the first split is actually significantly slower than after the Australian exit, where I managed to pull the cap down over my entire face. I’m glad the camera crew wasn’t there to document it.

It’s a long run to T1, uphill on the beach through deep, shifting sand, but I have a trouble-free transition. Guess I have learned something after all from the years of racing.

I literally shoot out of transition, filled with adrenaline and a sense of revenge from Motala. I have been checking the weather obsessively the last few days (see previous post) and the forecasts looks good. I feel good. Let’s kick some German ass!

The first 20 kilometers are easily pedaled despite some sharp turns and a couple of short, steep climbs. I average over 37 kph although I’m within my comfort zone. This is going to be great. I love triathlon! 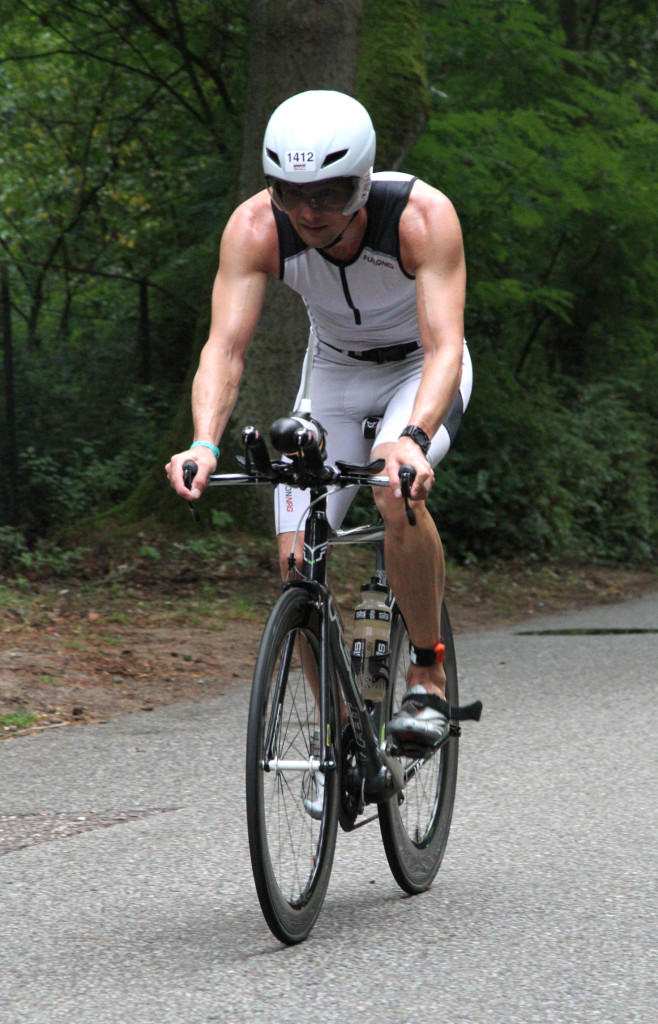 The enthusiasm is short-lived. At 40 kilometers the anticipated climbing starts. But how much do I have to fight to ascend 1500 meters over a total of 91 kilometers? And I have covered almost 40 kilometers already with very little elevation. That leaves 50 kilometers and still way over 1000 meters of vertical climbing. Doing math when racing has never worked for me so I keep on pushing, hoping my legs will forgive me.

But it’s not going so well. It’s a whole lot steeper than I expected and it never, never ends. One steep hill is followed by another which eases in to the next with minimal time to recover. At about 85 kilometers, finally the longed for descend starts. With one hand on the right brake leveler, and the other hand and arm in aero position, I squeeze the brake just enough to speed downhill at  75 kph. For the suicidal type, you can easily go as fast as 100 kph here, and one Pro Athlete supposedly has clocked 96 kph. I don’t even know if my bike can handle this kind of speed. It’s very scary. I have waited for the descend for the last one-and-a-half hour, now I don’t even enjoy it. I hate triathlon.

I’m a fairly good runner and my running form has been terrific this season with a 1:19:19 half-marathon and a 35:08 10-k race. With that in mind I sprint out of T2 in good spirit, and another successful transition. But again it doesn’t last long. After about 2 kilometers I cramp when hitting the first hill. There is a lot of swearing going on at this point, but with only a handful of Swedes in the race I should be safe, so I exploit a bit more foul Swedish Rated-R language loud and clear.

I’m confused. Was the bike course really that hard? Have I not taken in enough fluids or salt? Cramping is a mystery to me. Never figured that out. 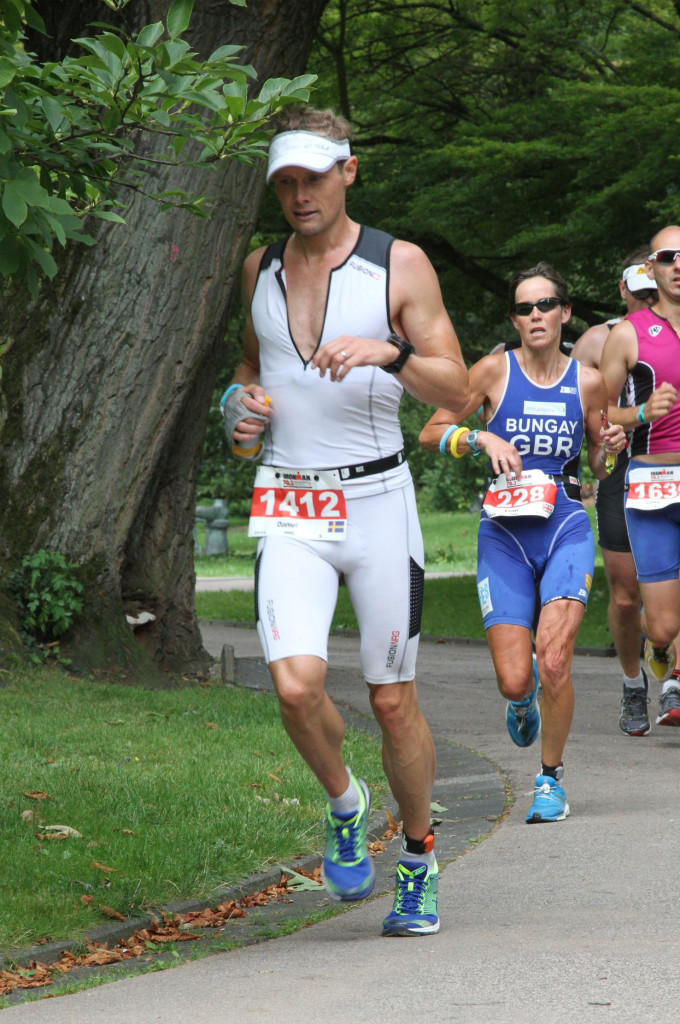 I change tactics and reduce my speed to a 1:30 half-marathon time. It’s a four-loop course and the first three loops I’m still on track, within the 1:30 mark. I overtake a Swede which I have been bumping into the days leading up to the race. He’s in the Age Group 30-34 and has some pretty good race results under his belt. Things are going quite well considering the tough race course (the run course is not flat either, but I’m tired of complaining about hills). I love triathlon!

This love-and-hate relationship that we triathletes share between us is a bit special, and when you’re out there you can look into people’s face and see the agony, the pain, the frustration, but also the determination. This gives me an extra boost going into the last lap and I increase the pace and it looks like I’m going to finish pretty strong after all.

I’m looking like I’m taking a sh*t in the middle of the run course.

Bang! There’s a sharp, intense pain in both my hamstrings. I’m cramping severely. I try to stretch out the back of my thighs when my quadriceps cramp, both of them. It’s a loose-loose battle. My thighs are cramping both front and back. The only position where my legs won’t cramp is in an awkward, forward-leaning positions with slightly bent knees, arched back and hands resting on my thighs. I’m looking like I’m taking a sh*t in the middle of the run course. The only way you can tell I’m not is that I’m still wearing my tri- shorts. I hate triathlon.

The last three kilometers I’m forced to walk, or run like a crippled, old man who lost his walker. I choose the latter and howl myself over the finish line in 5:13, still a decent time in Wiesbaden, although I had hope for much more.

Wiesbaden was the wrong race for me (and my bike). I wasn’t prepared for that kind of bike course, training mostly on fairly flat roads, and with my kind of stubbordness I was doomed to cramp. But I wanted to compete in a big Championship to feel the atmosphere and race the best of the best. And obviously I truly enjoyed it. I love triathlon!