I train or I race. In my world you either train or you race, and racing as a training session is just a waste of time and money. Or for some people, an excuse for a poor race performance, right?

There is one big difference between racing and training, I think — when I race I give it all and I don’t care about the past or the future. It’s here and now! But when I train I think about the what I did yesterday, and more importantly, what’s on the schedule tomorrow. When racing, it’s not like I’m going to be holding back when I’m leading the field and be like: I better take it a bit easy, tomorrow I have 20-kilometer run planned…

No, for me racing is always a race, no matter what race. And Klippan Duathlon was no different. I went all in! But there is another aspect to racing. How prepared am I?

So here I am. Standing on the start line, feeling pretty beat from a few weeks of hard training, thinking: this will be tough! I just joined the race a week ago and I haven’t prepared much at all, let alone tapered, or had any kind of rest leading up to this race. A first for me. I’m usually meticulous about race preparations since I believe you race when you race. I want to be ready. There’s no training in racing. But this time I’m testing new ground.

Boom! We are off. A bunch of men charges off through a field of thick, tall grass and knowing very little about the opening 10-kilometer run course I suspect a tough one.

And yes, previous warnings of a tough, hilly and trail-like run course are painfully confirmed as I head for Transition 1. But I’m in the lead by almost two minutes having ran a 3:43 pace according to my Garmin 910xt. But I clock 40:14 so either my Garmin is crap or the course is severely miss-mapped. I suspect the latter. After all, it’s a small local race in the middle of no-man’s-land.

Next is a 50-kilometer time trial bike. The difference this time: I just ran a very hilly 10 kilometers (and then some) in 40:15. But I feel terrific.

The common theme today is hills. The bike course winds it’s way up and down the countryside in a two-loop course. First lap is nerve-racking since I’m in the lead and I have absolutely no idea where to bike. Only faded markings in the road lead the way and spread-out tiny home-made signs hammered into the ground with right and left arrows, plus the one volunteer pointing straight ahead after 500 meters from Transition 1 (?). Thank god she was there to help making sure I was on the right track…

After the first lap I’m already running out of water. It’s very warm for a mid-April day and I was hoping to fill up my aero bottle for the second lap. I guess joining in the last minute has its flaws — I should have known there is no water station on the bike course.

After an all-out 45 kilometers on the bike my legs say no. Sudden severe cramping of my quads and hamstrings take me by surprise. Never had this happened before so I’m not sure what to do. I stand up on the bike in a lame attempt to stretch my legs, but since I’m cramping both front and back it doesn’t do any good. At this time I hear a beautiful sound of a rear disc wheel approaching. It’s a constant humming sound, familiar to all tempo bike riders. My team mate, Rasmus — an über biker — not only catches me, he flies by me in what seems like 50 kph. I’m going 38 kph, that I can read from my Garmin so my impression can’t be too far off. 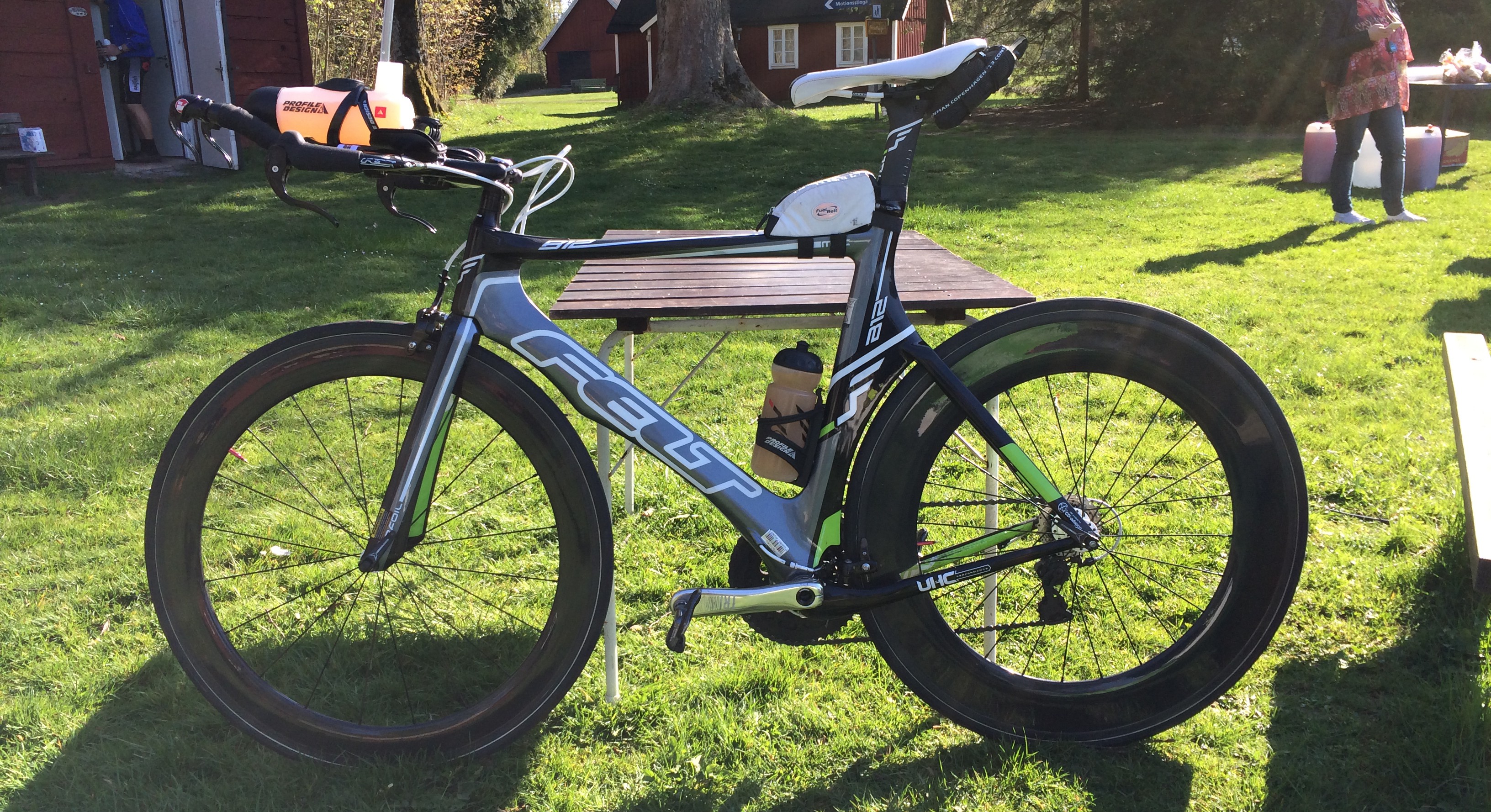 I approach Transition 2 feeling weary about my ability to run at all, cramping pretty much everywhere below my belly button. And I’m really thirsty. But I’m racing so let’s go! At least that’s what my mind says. My calves says no way. No, no, and no! I’m forced to stop already after 500 meters to stretch them out completely.

The run is a 2.5-kilometer (and then some) lap course. So for the second run split it’s two laps to make the 5 kilometers. The first lap is hell. I cramp like I have never cramped before, but I keep running looking like grandpa out for a Sunday jog, just missing the cane. The one and only water station is located after the first run lap. I stop completely and hose down two white plastic mugs of water. That was it! A few minutes later I can run again and actually start passing other athletes on their first lap. I’m back! But it’s too late. I have lost too much time on Rasmus. Still I push on and finish in second place out of twenty-some duathlon troopers.


And what did I learn?

What a mental battle that was! Cramping is painful but I kept pushing. Was it the lack of fluids that caused it or was it my inexperience with duathlon (run, bike, run), or did I simply push too hard? Who knows? But I think I will be better prepared next time I race!