The day starts early. At 3:45 I get up to take the necessary calories in the shape of flakes, muesli, toast with jam, juice and a banana. I season the flakes with a little extra maltodextrin and take a salt stick tablet. I like to feel moderately full about 3 hours before the race.

Then it’s off to Copenhagen by train. Just before 6:00 I arrive at Amager Beach Park to prepare the bike, put on the wetsuit and warm up close to the swim start. An hour before start I take in 200 calories from my sport drink and a sports bar.

The swim is held in the artificial lagoon at Amager Beach Park. The water is calm despite a strong wind from the southeast, but the starting area is quite narrow and I fear a chaotic start with hundreds of adrenaline pumped triathletes that will make the water anything but still.

I start in my age group 35-39 at 7:15. By chance I end up in the front group. As expected, it’s a fast start with a lot of congestion, kicks and grabs. Here you have to remain calm and find the rhythm in your beathing. It’s of great advantage if you can breathe comfortably on both sides. But from time to time I have to swim with my head straight up when two swimmers suddenly squeeze me from both sides.

I draft as much as I can and although I try to swim as straight as possible I swim far from straight and end up swimming a little longer than necessary. It does not help that my goggles are taking in water in the left eye and I have to swim with one eye closed the last few hundred meters. When I run out of the water my GPS watch is showing an average pace of 1:33 per 100 meters, which would give me a dream time of one hour. But due to my dodgy navigation the time is 01:02:27.

It feels a bit chilly when I run to T1, so I decide to put on my arm warmers, which is easier said than done with wet arms. A great beginner’s mistake that costs me a minute before I run to the bike. Soon I also realize that they are not needed since it’s quickly getting warmer when I bike out of T1.

The bike course is a mix of city center, coastline and countryside with two loops about 15 kilometers north of Copenhagen.

The wind takes me quickly out of town but not without many, many turns. But soon I spin over 40 km/h along the sea without any major effort. A wonderful feeling. Tactically I place myself about 15 meters behind two other riders who keep the pace steady the last few kilometers before we turn left towards the countryside.

But soon I spin over 40 km/h along the sea without any major effort. A wonderful feeling.

After a pleasant opening the first kilometers, it becomes less amusing when we turn south. Not only do I discover that my 400-calorie sports bottle has jumped out of my rear bottle holder, the wind that has helped me along the coast is now my greatest enemy, blowing fiercely in my face. 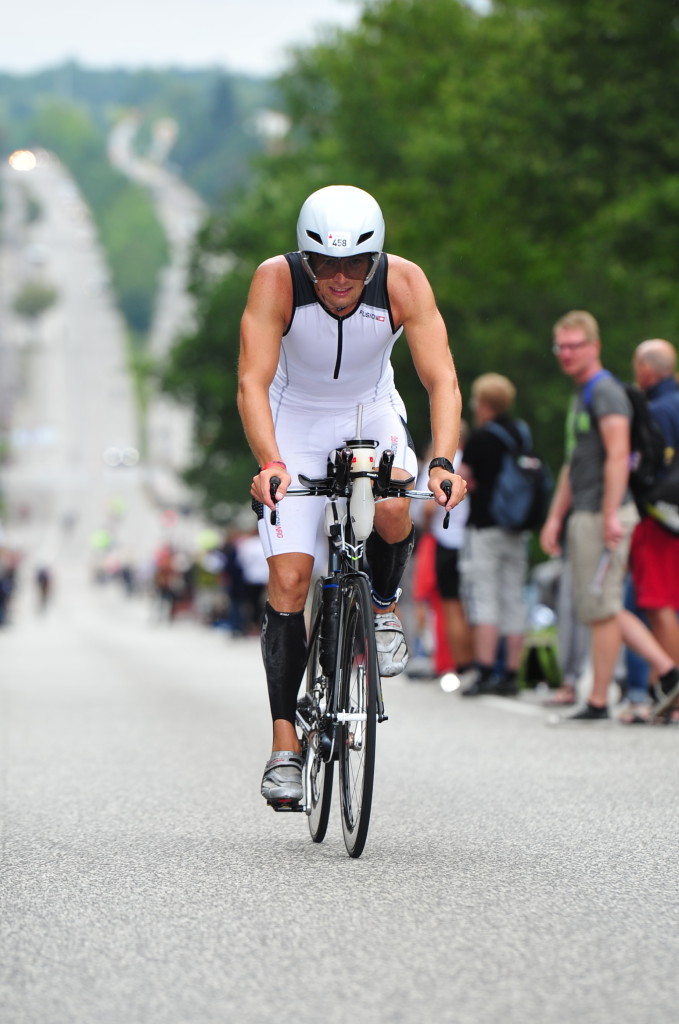 Unfortunately, I have no choice but to finish my three power bars that I brought with me to make up for losing my calorie-rich bottle. This is not the easiest thing when cycling against the wind up and down through the Danish countryside. My heart rate is high and getting down 400 calories in a relatively short time is a challenge alone. But I manage to restore the energy balance and drink about one liter per hour with about 400 calories, according to plan after all.

Then it happens again. A few kilometers after I’ve picked up two High 5 bottles with sports drink they manage to get out my bottle holder behind the saddle. This has never happened during training, but now I use new High 5 bottles.

So the second lap does not get the best start where I only drink water for 20 kilometers. But the wind is again behind me and I take the opportunity to recover. I know now how difficult the road back will be. I position myself again about 15 meters comfortably behind three other cyclists who keep the pace steady and we start passing other slower cyclists on their first lap. As we approach a hill the whole group is pressed together and I end up very close to the rider in front of me. He decides to swirl out to the left lane to pass more slower cyclists in front, but then he hesitates and turns to the right again. I have deliberately not slowed down to leave 10 meters distance because I’m waiting to see his next move and if I’m going to pass or not. We are now traveling up a long steep hill, so there is no benefit of drafting so I stay two meters behind him for a few seconds.

Wrong decision! The moment I think “Now I probably should drop back a bit to leave more room”, a motorcycle marshal pulls up next to me from behind and flashes a yellow card in my face. A four-minute penalty. I try to explain that we are cycling uphill and that there are ten other cyclists ahead who are keeping the same distance as I am (according to the rules you have to keep ten meters to the next man’s front wheel). But my protests are no good and my mood plummets. And now I have nothing to drink either.

Ironman is a mental battle and the last kilometers are clearly mentally challenging but I’m mostly angry and disappointed that I have had a some bad luck. First with High 5 bottles (I lost a total of four 75 cl bottles) that did not fit particularly well in my bottle cage, but above all for the stupid penalty.

Ironman is a mental battle…

Coming into T2, things happen very fast. Dozens of volunteers are ready to take my bike as soon as I dismount. I’m not really prepared for this when a volunteer quickly takes care of my bike shortly after I have jumped off. The next second another volunteer hands me my red bag with my running gear. I run to the changing tent and makes a lame effort trying to rush on socks and shoes. I forget my race belt and run back, then I stop at the penalty box to serve my four minutes. During that time, one cannot drink, eat, stretch, rest or sit down. The stop clock reads four minutes and just as I’m about to embark on the run I discover that when I handed over my bike in a hurry I forgot my GPS watch on the handlebars. Yet another mistake. I, who just got over the penalty and the accidents with bottle holders.

Without the GPS sports watch with time, pace and heart rate I will be running in the dark. This becomes particularly obvious when I ask a fellow runner after about two kilometers roughly what speed we are averaging. He has a similar Garmin GPS watch that I have thus answers: My last kilometer I ran in 3:57. I immediately slow down. 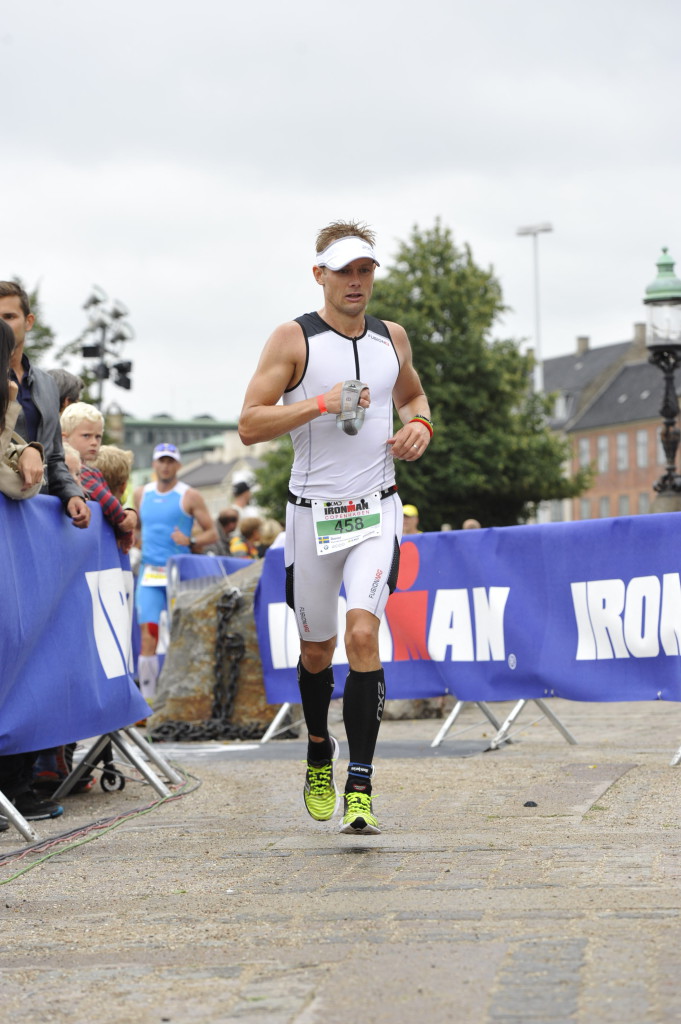 Without a watch, it also becomes difficult to stick to my liquid and calorie plan. The plan was to take a gel every half hour with half a liter of fluid. I’m doing the best I can by keeping an eye out for kilometers markings along the road .

Step by step I am approaching half the distance, 21 km. Everything feels pretty good so I increase the pace a bit, but how fast am I running? I have no idea. At 30 kilometers my legs begin to seriously hurt and that’s when the real mental battle begins. Some minor cramping in my inner thigh and stomach pains are holding me back a bit but eases after a few kilometers. I try to be light on my feet, shorten my cadence and straighten my back. I hope this will help but I do not have a watch that can give me direct feedback if I am actually increasing my pace. This is completely new to me and the last few kilometers I really would have needed my watch to tell me that I’m about to make the time of 9:30, which would have given me a huge boost. I know that. Now, I run mostly to get to the finish line and that’s not the way I want to race, really. I want to be able to enjoy the race, knowing that I’m about to accomplish something big, something I’ve worked hard for over a year and 400 hours of training.

So my finish is clearly sentimental but I am completely unaware of my time until my friends and family shouts congratulations – 09:30:39. I missed my goal by 39 seconds.

I missed my goal by 39 seconds.

It’s easy to blame an unfair penalty of four minutes, poor transitions and forgetting my watch on the bike, but my finish time is good after all. I’m pleased. The race was far from perfect, but no race is perfect and this just gives me more inspiration until the next Ironman. Then I will cut down another 20 minutes. I can improve so much! 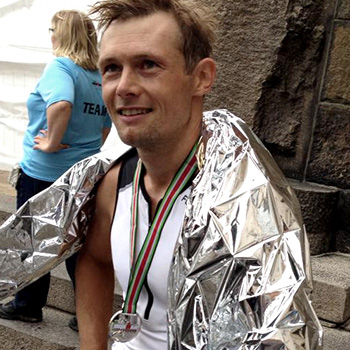