To remind myself of this season’s main objective (to get super fast), I had two short races planned at the start of the racing period.

To do well in these events my training has been more about speed and high intensity than what I normally do, especially on the run.

High intensity workouts are tough. That I knew going into this new regime of training. It’s a no brainier — if you push harder and go faster, it will hurt more. But what I’ve also realized during the last months is that I’ve learned to cope with more pain and can even embrace it (sometimes). Here we go again, time to suffer! Yay! So I haven’t only become faster, I have also learned to deal with more suffering. Killer combo, right?

Approximately one-tenth of a full Ironman distance, this mini triathlon was very short, almost too short to fully test my speed and form (and suffering skills). This was also my very first short course triathlon race ever!

About 200 people line up at the shore of the city of Trelleborg ready to swim 400 meters. I find myself standing in deep, foul-smelling piles of rotten seaweed before the horn sounds.

All athletes run out in the choppy waters like their lives are at stake. It’s a short swim but one of the most brutal I’ve experienced. People grab my shoulders, arms, legs and feet over and over and I have my taste of salt water!

After a quick transition I head out on the three (!) loop bike course. Although I have trained for short distances, 18 kilometers is closer to my short training runs than my short bike sessions, so I struggle a bit with the pacing.

After six 180-degree turns it’s time to park the bike and put on the running shoes. I sprint out of transition and just keep on going. It’s a two-loop course with tight corners and collision-prone trails. Indeed, I collide with two runners and trip when making a tight turn. 4,2 kilometers is over before I know it and I realize that this race was already settle during the bike.

My inexperience with short course triathlon racing was evident. I simply should’ve suffered more on the bike to at least given me the chance to run with the front field. Lesson learned: there is no holding back in short course racing and you must suffer from start to finish!

Next race on the schedule was Malmömilen — a popular 10-kilometer run race in my hometown. The goal to run 35 minutes or better has been on my bucket list since last year and now it was time to tick it off.

I’m standing at the very front of the start line with the “elite” group. Next to me are seriously dedicated runners wearing matching outfits. Two Kenyans with national team suits stand in front of me. Behind me are some 7200 runners ready to rock n’ roll.

Let’s rock n’ roll! The start is fast. The adrenaline is kicking in. After about 200 meters I glance at my Garmin GPS watch that reads 3:15 min/km pace. I slow down slightly. If I average 3:30 min/km I will make it. Simple math. 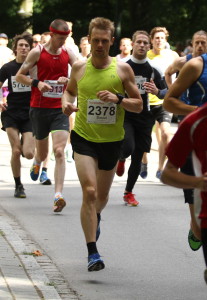 Not so simple, as expected, after two kilometers the suffering begins. From now on it’s hell on earth. We reach the ocean side where on this day (and pretty much any other day) the wind blows fiercely from the sea. Normally it’s west bound but today it’s coming from the north, the same direction we are running. Grasping for air I feel that I lose a couple of seconds per kilometer. Damn wind! You’re not going to screw up my plan!

But it’s a fact. At five kilometers I have lost six seconds despite pushing harder than I would have wanted to at this point. I’m in pain. I can’t breathe. I want to stop, now. But there, at half way I see my wife and son. My son’s big smile give me an extra boost, at least for 100 meters then it’s back to pain-face and this-really-hurts-mode.

Embrace it! Embrace the suck, to quote two-time Ironman World Champion, Chris Macca McCormack. I keep going with burning lungs, really trying to embrace it. Not so easy.

The last kilometer we are three guys suffering to make the finish. For some reason, suffering with others is easier and it gives me that extra charge of energy to pull away. Thankful, I leave them behind going for a sub 35-minute finish time.

My Garmin average pace clocks 3:30 min/km and time of 34-minutes-something. With a good last sprint I should make it. I dig deeper than I have ever done before and sprint for the finish. I see the time display appearing closer and closer. I can read it. 34:58, 34:59, 35:00… Noooooooo! Just a few seconds later I stumble across the finish line having missed my goal by eight seconds. Crap.

I’m really proud of my 10-kilometer race performance. I gave it all, really. I have improved my speed and suffer-ability a great deal. But now it’s time for some longer endurance events and more moderate levels of suffering.